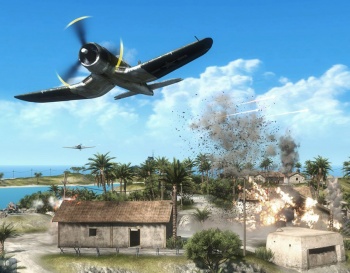 Bad news for gamers who grew up on the Battlefield seriers, but didn't spring for a console for the recent Battlefield 1943: The PC version of the game has been delayed to next year.

We haven't released a Frostbite [DICE's game engine] built game on PC, so going into this project we lacked a starting foundation we had on Console. There are also many different and unique only challenges to the PC that has lead to us pushing the release even further to Q1 CY 2010 [early next year]. This was a hard pill to swallow, but it was absolutely needed to ensure the features and functionality that PC Players have come to expect from Battlefield on PC are not missing. Things like support for DirectX 9 and 10, higher player count (up to 32-player matches), wide peripheral support i.e. Joysticks for flying, VoIP, and ranked server provider hosting. So it was and still is the absolutely right decision, for quality sake, to not release until it is ready.

Van Dyke has a point. Not releasing the game until it lives up to some undefined level of quality is the right decision.

That probably won't quell the anger of all those PC gamers who believe EA abandoned them to focus on the more lucrative console side of the industry, though.