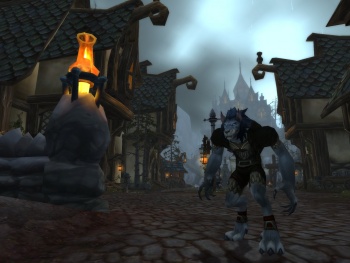 WoW Production Director J. Allen Brack and Diablo III Game Director Jay Wilson had a small Q&A about their respective games and spoke about the fate of the Diablo II heroes, who the final boss of Cataclysm would be, and if there was a planned end to World of Warcraft.

When will WoW End?: Someday, WoW may end, but it won't be at level 100 as people are predicting - in fact, Blizzard hasn't even considered it. "There is no planned ending point for WoW at all."

Will WoW players get to create high-level characters?: While Brack said that they've considered giving long-time players the ability to start characters at higher levels, as intimidating as level 85 - much less 100 - is, it won't take much longer. "We don't want the amount of time it takes to get to max level to change. The amount of time it took you to get to 60 will be the standard to get to 70, or to 80, or to 100, or whatever the level cap is."

Are there any plans to update WoW character models?: Brack said that the team had "talked a lot about it recently," since the Worgen and Goblins would look better than the already-better-looking Draenei and Blood Elves from Burning Crusade. The team tries to do small graphical changes at any one time, "because as soon as we do it, we get a slew of comments about how they don't look as good as the old ones." Still, the team was considering giving people the option which model they wanted to use - would it come in Cataclysm? Well... maybe. It's Blizzard, after all.

How did the WoW team react to the Cataclysm leak?: They "went through the five stages of grief, really. It's hard to not have this initial irritation, where you work on something, you want to build up a surprise, an awesome reveal, and have it yanked out from under you." But as the weekend went on, and they saw how the WoW community was getting excited about the news, it became easier to accept. "The reality is, the fans still went crazy for Cataclysm.

How familiar will you have to be with the lore to enjoy the Warcraft movie?: Well, the script isn't finished yet, so there's no way to know for sure, but the goal is for it to be a great story first, and a great experience. "Like Peter Jackson - he did a great movie that was awesome for the Lord of the Rings, but if you'd never read LotR in your life you just saw a damn good movie."

Why start at level 6 for the Worgen and Goblin starting zones?: Well, for Goblins, the answer is simple - levels 1-5 aren't done yet. But for the Worgen, in those levels you actually start as a Human, get infected by the curse, and eventually unlock your Worgen form. "It's a great experience, but not a great BlizzCon experience. If you want to play Worgen and start off looking like human, it feels like a letdown."

What Act was the playable Diablo III demo tied to?: The desert level we got to check out was from Act II, but the Act visions are not quite the same from D2 - they're "more of a story division than a geographic division. They're a nice bookmark; 'Where do we put our cutscenes?' and every act will have a different tone from a story standpoint. But there will be multiple towns, maybe even multiple areas within each act."

Will the fancy new Battle.net features for StarCraft II be in Diablo III?: Almost certainly - if you're in Diablo III, you'll be able to chat with your friends in SC2 or WoW via Battle.net, though there may not be plans to support legacy content like Diablo I in the same way. But there will be easy communication, and the same easy matchmaking - you will "choose a character, hit a button, and you're in a game with someone else."

Can we save Diablo III replays like we do StarCraft II?: Wilson admitted that one of his programmers had told him just the other day that it would be possible - but that was literally the only conversation he'd had on the matter.

Will we see Diablo II's hero in D3 like we did the hero of the first Diablo in D2?: "You will see the fate of, not necessarily every Diablo II hero, but some of them." In fact, the Barbarian is supposed to be the same Barbarian from D2, which is why he looks older like that.