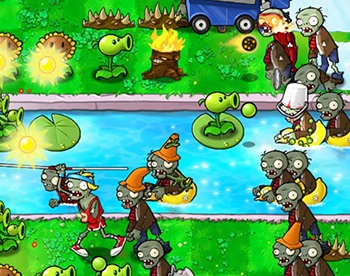 Over the course of last weekend's BlizzCon '09, I noticed more than a few references that led me to wonder: What the hell is up with Blizzard and Plants vs. Zombies, anyway?

As a huge fan of PopCap's Plants vs. Zombies, hearing some of the StarCraft II developers namedrop the game during a panel at BlizzCon as one of the most sterling examples of the Tower Defense genre brought a smile to my face. Anything that gets a few more hardcore gamers to experience the joy of defending your house (and your succulent brains) from the shambling undead with various horticultural weaponry gets a plus in my book.

But then the strange part was... they kept on mentioning it. Whether in panels, on the live DirecTV stream, or in smaller press conferences, I caught Plants vs. Zombies namedropped no less than four times - and there may have been more that I missed. Harmless love for zombie-themed tower defense games? Or... something more sinister, perhaps? I bravely decided to investigate.

It's no secret that PopCap and Blizzard are pretty tight these days - not only did PopCap's VP of video games platforms, Greg Canessa, head over to Blizzard back in May, but the two companies have collaborated before: Bejeweled and Peggle are both available as in-game WoW mods, and let's not forget the free WoW-themed Peggle pack we saw at the beginning of July. Hell, PvZ mastermind (should we say "brainiac"?) George Fan was a former Blizzard employee, tasked with scripting the AI for Diablo III.

Clearly, nefarious forces are at work here. After all, Blizzard and PopCap have a reputation for not only making games that are absurdly well polished and fond of pop culture references... but horribly addicting. Might this be part of a vicious scheme by the two companies to addict gamers so badly that they stay at their computers 24/7... effectively turning them into batteries for a proto-Matrix? If Escapist Senior Editor Susan Arendt's prediction comes true and we see a Plants vs. Zerglings bonus map in StarCraft II, we'll have our answer.

Maybe it's not quite that evil, on the other hand. Blizzard and PopCap do seem to have quite the good working relationship, and while you'd think that Peggle and WoW would have completely different target audiences, there might be more overlap there than at first glance - and it's easy to imagine that this is just simply a very clever (and potentially extremely lucrative) marketing deal for both companies to reap the rewards of the other's massive fan bases.

Or, on the other other hand, maybe I'm reading way too much into this. PvZ was developed by a former member of the Diablo III team, after all. Maybe - as VG247's Nathan Grayson remarked after I pointed this out - it's just that Plants vs. Zombies is one hell of an awesome game. Who doesn't love it?

I guess not even a gargantuan developer like Blizzard can resist that cheery little sunflower. Who knew?