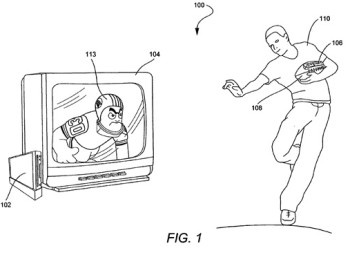 I don't actually own a Wii but I love it nonetheless, mainly for the way it's able to turn random household objects into integral parts of the gaming experience. Who knew that a bathroom scale would become the biggest thing in game controllers since the D-pad? Or that designing new and interesting ways to turn Wii Remotes into weapons of minor destruction would become a sort of meta-game in itself?

The latest evolution of that design philosophy may soon be upon us: The "soft football controller," a patent application for which was recently filed by Howard Cheng, vice president of R&D at Nintendo of America. The device appears to be essentially a Nerf football with a slot for a Wii Remote and a hand strap so you don't accidentally knock over lamps more than once or twice a day.

The unit will work with a conventional Wii Remote to determine throwing action as well as side-to-side and jumping motions for when you absolutely, positively do not want to be turned into a smear by that 350-pound defensive tackle, while running speed in the game will apparently be determined by "jogging motions" made by the player. It also has provisions for the Nunchuk to "improve the controller's sensitivity," as well as the Wii Motion Plus, which will "detect orientation and improve ability to recognize actions."

The ball itself may be soft but after reflecting upon my own social situation and how the members of that group would react to the presence of a squishy football videogame controller, I foresee trouble nonetheless. "Trouble," as in trips to the emergency room and possibly divorce court.

No word on when we might see this pretend pigskin hit the market, but given that it's little more than a dangerous idea at this point, it'll be a long while yet - giving you the time you'll need to save up for the inevitable trip to Ikea.