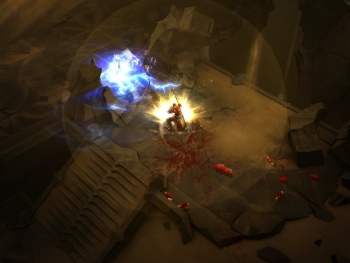 Want to kick demonic ass through the rainbow blood-spattered fields of Sanctuary, but don't have a good gaming PC? You may be in luck, as Blizzard is in talks to potentially bring Diablo III to consoles.

BlizzCon may be over and done with, but the news keeps rolling in. GameTrailers TV's Geoff Keighley was one of many journalists on the show floor out in Anaheim, and spoke with a few Blizzard higherups - in this case, COO Paul Sams. Keighley tweeted:

Paul Sams of Blizzard says they haven't ruled out Diablo III for consoles -- and are currently talking to the first parties.

Now, okay - saying that the company hasn't "ruled out" the possibility is probably as weak of a confirmation as you could ever potentially get, but the interesting part is the second half of that sentence: that the Irvine-based developer is talking with the major players (presumably Sony and Microsoft) to make it happen.

There's no doubt that the 360 and PS3 have the power to make Diablo III a reality, and its multiplayer system would actually be suited really well to services like XBL and PSN... but there are two potential problems immediately visible. For one, Diablo III is heavily based around point-and-click (and click, and click, and click...) gameplay, where being able to send a ball of explode-y light at one particular spot on the map in a split second is absolutely crucial to survival on the harder difficulties. The mouse-and-keyboard interface seems very difficult to replicate with a standard 360 or PS3 controller, so unless they'd aim to rebuild the entire D3 mechanics from the ground up, that seems unfeasible.

The other issue isn't endemic to Diablo III, but should be painfully familiar to fans who bought the console versions of Team Fortress 2 and Left 4 Dead - it's one thing for a developer to support and patch PC versions of their games, but rolling those same patches out onto consoles seems like another hurdle altogether.

But hey, at least they're talking about it, no?