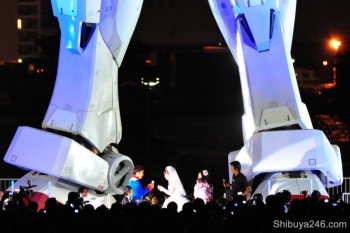 We here at The Escapist have been dutifully bringing you all the news about the life-size Gundam statue standing 18 meters tall above Odaiba, Japan since construction started back in March, partly because we feel that we have a duty to inform the world about Japan's secret military projects hidden in plain sight, and partly because it's awesome.

To celebrate the final days of the Gundam statue before it gets torn down and moved to a military base where it will be made fully functional, one lucky couple was chosen from over 500 applicants to tie the knot beneath the behemoth giant robot. In a ceremony held yesterday, in front of thousands of onlookers, tie the knot they did.

Fittingly enough, the groom was dressed as Amuro Ray, the protagonist of the first Mobile Suit Gundam, though his bride-to-be was wearing a boring plain wedding dress instead of getting dolled up to match. Perhaps that's for the best, though, given the notoriously low survivability rate for pilot love interests throughout the Gundam metaseries. This isn't to say that the lucky lady didn't share her new husband's enthusiasm, though - they named their baby daughter Seira, after Sayla Mass.

Apparently, merely getting the opportunity to say one's vows beneath a giant robot wasn't good enough on its own, as a surprise visitor came to wish the newlyweds well - Gundam creator Yoshiyuki Tomino, bearing framed and signed artwork of the good ol' RX-78-2 as a gift.

While this may seem a bit strange at first, consider that Gundam is as iconic and influential in Japanese pop culture as, say, the Star Wars trilogy is in the West - with Char Aznable as immediately recognizable over there as Darth Vader would be over here. Now imagine a couple here in the States (or in Canada or the UK, wherever you please) having a Star Wars-themed wedding. Still a bit nerdy, but not unthinkable, right?

We here at The Escapist wish the couple well, and wish them the best of luck in freeing their souls weighed down by Earth's gravity in order to become Newtypes, the next evolution of humanity (in space).

See a full gallery of pictures from the ceremony here.