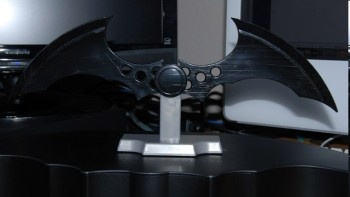 Batman: Arkham Asylum is a hit in all ways but one: The Collector's Edition Batarang is a cheap piece of crap.

A lot of eyes lit up when Eidos announced that the Collector's Edition of Batman: Arkham Asylum would include a full-sized Batarang. The $100 price tag threw a bit of cold water on the news, but hey, it's a Batarang!

Except it's not really a Batarang at all, it's a cheap hunk of badly-scratched, molded plastic glued to a stand. The scratches are apparently intentional, to give it a degree of authenticity by making it look as though the Caped Crusader himself has used it extensively in his never-ending war against crime; unfortunately, as one observer noted, it looks less like battle scars and more like somebody dragged it behind a car for an hour. Michael Thompson of Ars Technica noted that some of the scratches actually reveal white plastic underneath.

Perhaps even more disappointing, it can't actually be removed from the stand without breaking something. Not that you'd necessarily want to use it to fight crime with but let's be honest here: No nerd in good standing wants a Batarang he can't pick up and wave around every now and then.

Complaints have started to pop up across the internet, including on the official Eidos forums, where at least one user is trying to drum up support for a refund or replacement. The problem, of course, is that once the box is opened and it's discovered that the Batarang isn't quite up to snuff, any opportunity to take it back is gone because retailers, by and large, won't accept returns on opened software.

This wouldn't be such a big deal if the Collector's Edition was priced $10 more than the standard release, but for a $40 hike it tends to sting a bit. Opinions will vary, of course, and you may be more or less satisfied with it than the next guy. Bottom line is this: If you're not 100 percent sure that you want this thing, check it out in the store before you cart the box home. You might save yourself a few bucks.