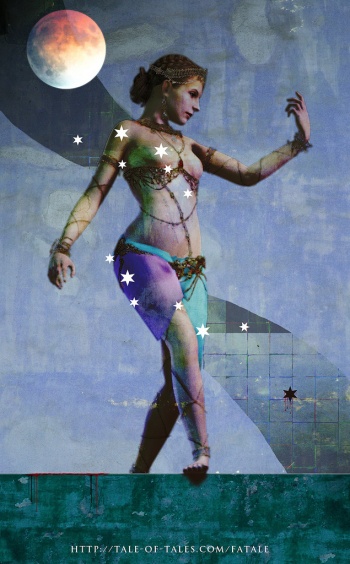 Indie studio Tale of Tales has teased its follow up to critically acclaimed title The Path, with an image of its lead character.

Tales of Tales garnered a lot of attention with their recent release The Path, a vivid retelling of Little Red Riding Hood, which experimented with narrative structure and eschewed the normal victory conditions of videogames. Tale of Tales's next project should be equally interested, as it focuses on the biblical character Salome, who was responsible for the death of John the Baptist and is seen in Christian tradition as a symbol of the dangers of female seductiveness.

Salome as a character has been depicted in a number of different ways over the years, ranging from a young woman manipulated by her mother to a crazed necrophiliac temptress in a play by Oscar Wilde.

Tale of Tales's project, tentatively titled Fatale, will apparently try and address all of these different interpretations, and to that end they enlisted the help of Takayoshi Sato, whose guiding hand helped shape Silent Hill 1 & 2, to model the lead character:

"Sato's Salome is all of these women. She's not a classic beauty. But very pretty nonetheless. She doesn't wear lot of clothing after having danced away her veils. But her nakedness feels natural in the cool night breeze. The abundance of jewellery on her body is at once arrogant and innocent. She's attractive but there is nothing obscene about her. Her sensuality is that of a virgin. Her skin is telling us that our touch will corrupt her. She challenges us. She confuses us."

As confusing as this sounds, this kind of metaphorical storytelling is what Tale of Tales do, as anyone who has played The Path can attest to. Sato's Salome can be seen to the right, and a larger version of it can be seen here.