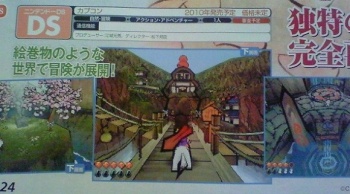 Last week, rumors spread after Capcom discreetly registered the name Okamiden - and now scans from Japanese game mag Famitsu might confirm the existence of the Nintendo DS sequel to the critically acclaimed Okami.

Despite heavy critical acclaim and a devoted cult fanbase, Okami failed to live up to the adoration sales-wise, and developer Clover Studios shut its doors not long thereafter. However, last week's revelation that Capcom had trademarked "Okamiden" reignited fans' hopes that the series wouldn't be dead after all.

Now, scans of the latest Famitsu issue seem to confirm the game's existence - or at least, it confirms a sequel to Okami on the DS, since we can't see the name in the scan. Still, if Capcom happened to be working on an unrelated game called Okamiden at the same time it had a studio working on another Okami title, that's a massive (and unlikely) coincidence.

It's hard to imagine a better platform for the game, actually. Assuming they keep the same "paintbrush" concept from the first game, what better way to control it than with a stylus?