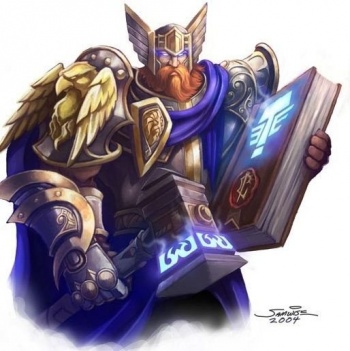 The Russian Orthodox Church has received what is probably the first and only pitch for a videogame it will ever get in the form of a design document whipped up by a priest with an idea for a religious MMOG.

You can't say that World of Warcraft doesn't have religion in it. Those who would say the act of playing the game has spiritual dimensions aside, you've got Paladins who worship the Holy Light, Druids who worship nature, Mages who are into the arcane, not to mention your Priests, who are just straight up spiritual by definition. But imagine a game where religion isn't just some lore background that explains the history of your class, but an actual theme that an MMOG revolves around.

That's what the idea behind the game one Father Maxim of the Russian Orthodox Church has pitched. The priest apparently submitted a design document to a Moscow branch of the church hoping to get them interested in backing the project, which will be an MMOG in which you're rewarded for doing good deeds but "suffer hardships" for going against the faith. Progress in the game, apparently, is measured by how well you can obey the Ten Commandments.

"Young people spend their time in a virtual world, and it'll be better if they spiritually develop instead of 'shooting and killing," Father Maxim said.

And like any role-playing game, there are player classes. Male characters can choose to become seminarians, priests or bishops, while female characters can be sisters of mercy, nuns, and even rank up to become mother superiors. Apparently you can also choose to go either the secular path or live within the church.

Sounds like a real grind, but hey, that's an MMOG for you.