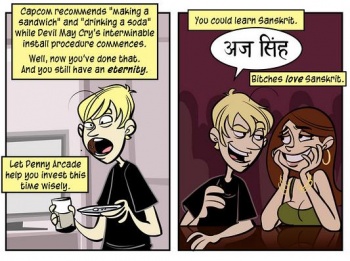 Not only is the PS3 Slim smaller, lighter, and cheaper than the PS3 "Phat," it's also a bit quicker - installing games 20% faster than its bigger brother.

Digital Foundry has a video up showing a side-by-side comparison between the PS3 Slim and the old PS3 as they both tackle the notorious Devil May Cry 4 installation. The PS3 Slim turns a better time, finishing three minutes before its elder brother. Granted, three minutes shorter still results in an eighteen-minute install time, but shorter is shorter, no?

The installs required by some PS3 games are one of the more frequent complaints levied at Sony's consoles, since the idea of an "installation" tends to be what puts many console gamers away from running games on the PC - with a console, they think, it should just be pick up, put in, and play.

While these complaints are still valid - this is just a reduction, not an elimination - it's nice to see Sony moving to address them. So the PS3 Slim is cheaper, smaller, and quicker - what's not to love? Now if only they'd bring backwards compatibility back, we'd have ourselves one damn fine machine.