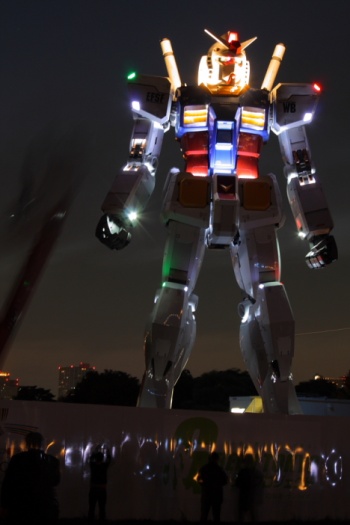 The months-long saga of Japan and its life-size Gundam statue was to come to an end today - but deconstruction was delayed due to a typhoon. At least, that's what the Japanese want us to think.

We've been dutifully reporting on Bandai's life-size Gundam statue celebrating the franchise's 30th anniversary from the beginning to completion to the most badass wedding ceremony ever, but the story looks like it will at last be coming to an end - deconstruction was scheduled to begin today, as the statue's time to stand guard over Odaiba, Japan, was up.

Or was it? According to CrunchGear, the planned deconstruction has been put off for at least a few days thanks to rather unpleasant weather (specifically, a nasty typhoon). This leads me to one of two interpretations: One, this so-called "typhoon" is actually just cover for its first operational test. Two, this is a sign from The Powers That Be that this statue should be left standing at all costs. Have you learned nothing from the historical Kamikaze, Japan?!

Alas, one can only imagine that deconstruction will proceed as planned once the weather clears up. The statue's ultimate fate is in doubt, but it's strange to imagine that after spending so much time and money building the thing, it would just be scrapped. So perhaps the story isn't quite over just yet.

Maybe while they're taking it apart, somebody will pose the thing into the famous Last Shooting scene from the final battle in the original Mobile Suit Gundam. I mean, if you're going to be taking off its head and arms anyway...