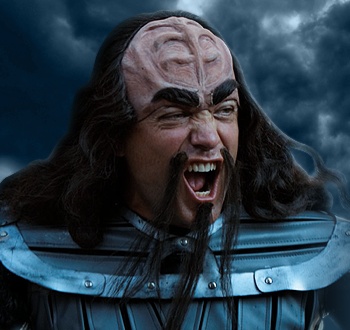 Has the image of crazed fans angrily nitpicking the creators' every word come from actual Trekkies? Or is it the other way around: Do fans only act like that because they think that's how they're supposed to behave?

Ask someone to envision an angry fan whose life is consumed by his (or her) fandom of choice; a fan who hates the creators but loves the product, and they'll probably say "Trekkies." Those rabid Vulcan-ear-wearing fans of Gene Roddenberry's classic sci-fi franchise define the trope, naturally. Haven't they always been that way?

Well... maybe not. As Colin Roswell examines in Issue 217 of The Escapist, Trekkies may have only become the ur-example of insane fandom because everybody thought that was how Trekkies were supposed to behave:

The key qualities of the Trekkie image were rabid obsession with a touch of repressed rage. Costumes were probably involved. They didn't have much else going on in their lives. People have displayed these qualities for thousands of years in all sorts of pursuits, but the Trekkie image was tailor-made for the growing world of pop culture. It seeped into the public consciousness through movies, documentaries and parodies. People who'd never been to a sci-fi convention picked up cues. Marketers picked them up faster. The internet hurled them around at warp speed. And, if you ask me, way too many people started living the dream.

The Angry Fandom template says: If you run as fast as you can after a mirage, eventually you'll end up in a spaceship.

So the next time you watch Galaxy Quest and laugh at the nerds, or roll your eyes at the pretentiousness of The Simpsons' Comic Book Guy, or snicker at the intensely in-depth questions asked by WoW addicts at BlizzCon, ask yourself: Does the fandom make the image, or does the image make the fandom? Read the full story in "Get A Life" in Issue 217 of The Escapist.