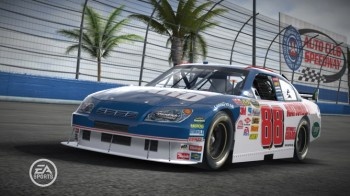 EA Sports President Peter Moore has confirmed that the company has dropped the NASCAR racing franchise from its lineup.

Reports that EA would pass on a NASCAR title for 2009 surfaced back in February, when both sides apparently began to question the need for annual updates to the series. At the same time, NASCAR also said it was considering moving to a non-exclusive licensing model when it's deal with EA expired.

By all appearances, that relationship has in fact ended, as Moore confirmed yesterday that EA Sports is finished with the NASCAR franchise, not just for 2009 but for the foreseeable future. "There are no plans right now for NASCAR from EA," he said.

"We had a great relationship over the years that I thoroughly enjoyed when I first got here. Unfortunately... we had to make some tough trade-offs," he continued. "We've had to redeploy some of those folks. A number of the NASCAR team has moved over now to EA Sports MMA, which will be shipping next year. [We're] still a huge fan of NASCAR, but no plans right now to develop any further games for NASCAR from EA Sports."

It's not what I'd call a particularly surprising development. NASCAR has a huge, rabid fanbase but the market for simulators is niche at best and these days the racing genre is dominated by arcade-style "street racers" like the Need for Speed and Burnout series. Even EA's most recent NASCAR title, NASCAR Kart Racing for the Wii, was a cartoonish kart game rather than a real driving sim. New NASCAR-based games will undoubtedly pop up in the near future but I wouldn't expect any serious racing titles to be among them.

Gallery of the Day: 8 of the Best Racing Games Ever Created DrStrangelove 27 Comments