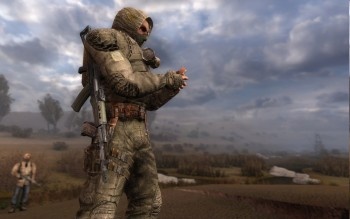 GSC Game World has apparently confirmed that it is working on a version of the first-person shooter S.T.A.L.K.E.R. for the Xbox 360, but says it won't be out until sometime after S.T.A.L.K.E.R.: Call of Pripyat has been released for the PC.

Although best known as a PC developer, Ukrainian developer GSC Game World became certified as an Xbox 360 developer in November 2007. At the time, the company said it was happy about the possibilities for multi-platform development, although its focus would remain on PC development.

Specific plans for the 360 weren't discussed but the assumption was that some version of the post-Chernobyl FPS S.T.A.L.K.E.R. would end up on the platform and in an interview with Stalker-Portal.ru (translated by Strategy Informer) , the studio has finally appeared to confirm that plan. "We think that whatever port of S.T.A.L.K.E.R. for Xbox 360 won't come out before the full release of the game's sequel," GSC's Oleg Yavorsky said.

"We have become a developer, not only for the Xbox 360, but also for the PlayStation 3 and the Nintendo Wii," he added. "We've been also developing a prototype for the PSP, but currently there's not enough manpower to make our ambitions come true."

When asked if S.T.A.L.K.E.R.: Call of Pripyat, due this fall, could also be released for the 360, he answered, "At the moment, all are busy with preparing the PC version of the game. What comes after - we'll see."

It's no secret that I'm a huge fan of S.T.A.L.K.E.R. but I'm having a difficult time imaging it on the 360, or any console, for that matter. It's an intense, ridiculously atmospheric and immersive shooter that often borders on absolute brilliance; it's also famously glitchy, harder than hell and often borders on complete incoherence. S.T.A.L.K.E.R. is very much the anti-Halo: Bleak, confusing and utterly unforgiving. For hardcore shooter fans it's a dream, but whether it would hold the same appeal for everyone else is another matter entirely.