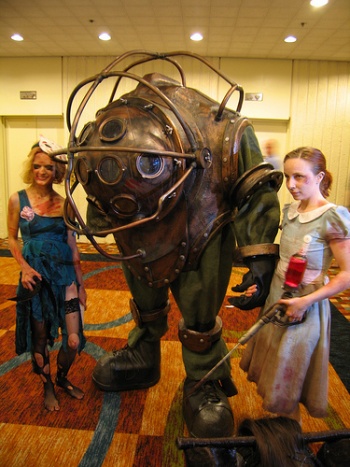 Remember that guy who made those super-impressive replicas of the Portal gun and Little Sister syringe? He decided to step up his game and make a Big Daddy costume, and he's ready to teach you how to make your own, if you've got seven weeks to spare.

Propmaker Harrison Krix does not joke around when it comes to making real-life replicas of famous videogame objects. His Portal gun and Little Sister ADAM syringe were impressive enough, but Krix has really outdone himself this time around with his Big Daddy costume for Dragon*Con 2009, a project which took Krix a cool seven weeks and a whole lot of labor.

Anyway, if you've got the time and materials to spare, Krix has a detailed step-by-step documentation of how the project came together. It started with blueprints, which Krix prepared from the 2K Bioshock artbooks, and then went in steps, from the main body to the helmet dome to the drill arm to the dome cage and then finishing touches.

The main body was built from insulation and expanding foam, stretch fabric, fiberglass resin and more. The dome was actually built from a security camera dome (those ominous looking black half-spheres you see in department store ceilings) with the portholes made with silcone. As for the drill, you've got matteboard, aluminum rod, foam, fiberglass resin and a DeWalt 12V cordless drill to make the thing actually spin. Yes, the drill arm works. What the hell.

All in all, Krix says the thing weighs around 50 or 60 pounds. Without the arms he could manage walking with ease, but with them attached he could only stand in place for about 30 minutes at a time. Walking outside in the Atlanta heat, he says, "bordered on suicide." There's a reason they call it Hotlanta, man.