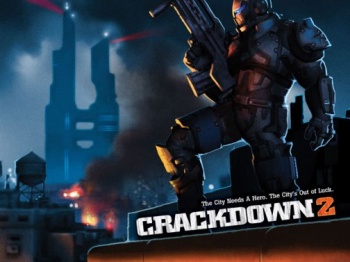 The first details about Crackdown 2 have finally surfaced, and it looks like Ruffian Games' sequel will deliver much more of the same as the first game, with one key difference: there are zombies involved.

Zombies, zombies, zombies. They're on your lawn, they're in your movies, they're in every other videogame you play. Who knows if werewolves are the next big thing or not, but zombies aren't going away any time soon, it looks like. Even Crackdown's getting in on the zombie craze. According to alleged details picked from Game Informer's cover story on the game, Crackdown's Pacific City will be overcome by a wave of the undead in its sequel.

Apparently the premise of Crackdown 2 goes like this: after defeating all three gangs in the first Crackdown, things haven't been going so well. Some sort of virus broke out in parts of the city, sending a good portion of population into zombieland. Naturally, citizens aren't happy about this and how the Agency handled it, so some of them start a new gang, leading to a three-way war between the Agency, the civilian gang, and the zombie horde.

Since things aren't exactly peaceful in Pacific City, the city has undergone some changes. The roads and architecture are all the same mostly, but some of it has been destroyed and damaged amidst all the chaos. Supply Points, the hubs spread out around the city you used to store weapons and stock ammo, are no more - you can now call in new weapons and supplies from anywhere.

Speaking of weapons, they'll be in much greater variety in Crackdown 2. No more whoring the rocket launcher for the entire game - there's a new shotgun, a rail gun and sticky grenades, to name a few of the new armaments you'll acquire. As for how you'll skill up your affinities with those weapons, it'll work the same way as in Crackdown, where you collect orbs for using certain abilities to boost them.

Co-op will support four-players, as was previously revealed, and the game will be built around co-op play much more than the first Crackdown. There will also be a 16-player deathmatch mode which is supposedly quite a bit of fun and features a Modern Warfare-style character progression system.

Overall it sounds like more of the Crackdown formula we know and love, plus zombies. And while I'm as sick of zombies as everyone else, I have to say that the idea of picking up a zombie corpse and throwing it off the top of a skyscraper sounds pretty damn fun.