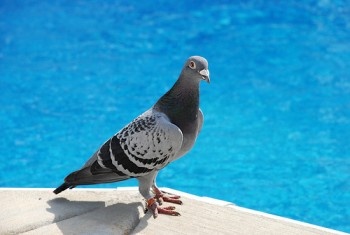 An IT company struggling with slow internet speeds has discovered a new way to dramatically increase its data transmission rates - a carrier pigeon.

Tired of dealing with unreasonably slow internet speeds, Unlimited IT of Durban, South Africa, decided to make a point by comparing the ADSL speeds of Telkom, the country's largest internet provider, with the speed of Winston, a pigeon. The idea was born when a frustrated Unlimited employee said it would be faster to just send data by carrier pigeon.

"We renown ourselves on being innovative, so we decided to test that statement," said Unlimited's Kevin Rolfe.

Rules were put into place to ensure a fair race: No cats were allowed and Winston was not allowed to eat any performance-enhancing birdseed before his flight. The bird was outfitted with a four-gigabyte memory stick and set loose from the company's call center in Howick, 60 miles away from Unlimited's Durban office. At the same time, an upload of the data between the two offices was started.

Winston took one hour and eight minutes to fly from one office to the other and deliver his cargo, while another hour was required to upload the data from the stick to their computers. Tthe online data transmission, meanwhile, was only four percent complete over the same stretch of time.

"Winston is over the moon," Rolfe said of the feathered internet-killer. "He is happy to be back at the office and is now just chilling with his friends."

Telkom, naturally, claimed it wasn't responsible for the slow internet speeds at Unlimited IT. In an email, the company said, "Several recommendations have, in the past, been made to the customer but none of these have, to date, been accepted."