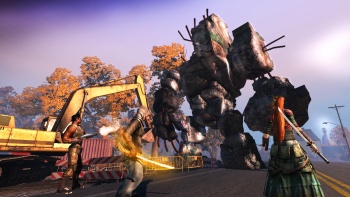 Funcom has taken the wraps off of The Secret World, an modern-day MMOG that posits the question: What if every myth, conspiracy theory and urban legend was true?

We've known about Funcom's alternate-reality MMORPG (that may or may not be connected to cult classic adventure The Longest Journey) for a while now, but it wasn't until last weekend at PAX that the game was formally unveiled. While it's certainly way too early to pass any sort of judgment on the game, what little we've seen is looking pretty darn cool.

The game doesn't take place in a foreign world like Norrath or Azeroth, but rather in our very own world in the present day - just a world where every little bit of mythology and legend is true. From the official website:

Imagine if every myth, conspiracy theory and urban legend was true. Imagine if your worst nightmare came to life. Imagine a world where vampires hunt for mortal blood in dingy London nightclubs, where werewolves lurk in the sewers beneath Seoul, and where the undead prey on the living in the shadows of New York City. This is the premise for «The Secret World», Funcom's upcoming massively multiplayer online game set in the modern day real world.

Player characters will be able to "throw themselves" into the bustling nightlives of some of the world's biggest urban areas, and shop for fiery katanas and powerful automatic rifles alongside shopping for the most stylish new outfits (presumably). Beyond shopping, though, they'll also be able to join secret societies like the Illuminati, the Dragon and the Templars (the three revealed thus far) in order to, uh, mess some creatures of myth and legend up.

From the screenshots we've seen thus far, it's got a pretty cool visual style, and let's face it: Any game that lets you take on a golem made from what looks like the concrete remnants of presumably a bridge or other building, is a game that earns points in my book.

Funcom has an office down here in Durham, North Carolina - otherwise known as The Escapist home turf - so who knows? We might just drop by and see if we can get some dirt on this very unique-looking MMORPG sometime soon. Stay tuned.