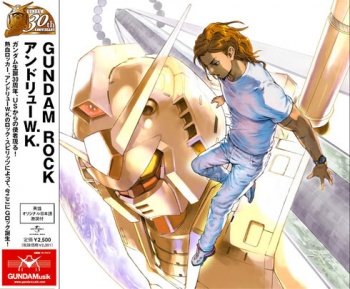 Party Hard rocker Andrew W.K. has taken it upon himself to celebrate the 30th anniversary of the genre-defining Mobile Suit Gundam with an album of rock-music covers of classic Gundam music.

It's always kind of fun to find out that people who have achieved actual public success (of a sort) are closet nerds. For example, Vin Diesel loves Dungeons & Dragons. While not as famous as The Diesel, Andrew W.K. is a decent success in his own right - best known for Party Hard - and has recently revealed himself as not only a big fan of Japanese music, but of the Gundam mecha franchise.

This year is the 30th anniversary of the first Mobile Suit Gundam, and the Japanese have celebrated by building giant statues of the titular mech in a bizarre and awesome form of idol worship. But it isn't just the land of the rising sun that's getting in on the fun here: Andrew W.K. is releasing an album of English-language covers of Gundam theme songs.

Now, bear in mind that this is (as far as I can tell) all classic Gundam music, which means it has all the delightful cheese-factor of old-school anime music (come on, we're talking late 70s/early 80s here). So, it does sound a bit dated, and fans of the newer series won't find any Andrew W.K. covers of, say, Daybreak's Bell or Invoke (a shame, too - Daybreak's Bell is my favorite Gundam opening in a long time).

The English-language Fly! Gundam (in the video below) sounds a bit awkward, so we suggest listening to his version of Soldiers of Sorrow instead. Even so, I have to give the guy credit where credit is due, since this is just such a delightfully nerdy thing to do. Plus, he's shown holding a model of the Nu Gundam, which everybody knows is awesome. Except for Keane.

Update: Holy crap, guys. Andrew W.K. also did Gihren Zabi's famous "Sieg Zeon" speech on the CD. And it is epic as hell.