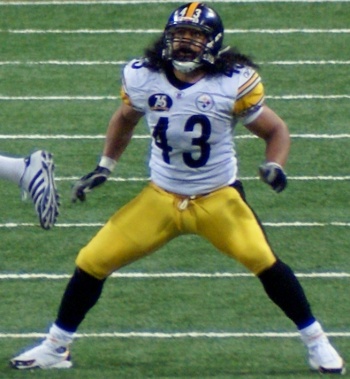 The infamous Madden Curse has struck again, sending cover athlete Troy Polamalu of the Pittsburgh Steelers to the inactive list for three to six weeks with an injured knee ligament.

When will these NFL players learn that what money and minimal fame they might earn from being on the cover of Madden NFL isn't worth the cost? Would you really put your body at the risk of serious bodily harm courtesy of the Madden Curse simply for tons and tons of cash? I suppose that's something you say yes to simply by deciding to be a professional football player, so I guess it's not that big of a leap.

Or maybe some NFL players think they can dodge the Madden Curse, the superstition that states that anyone on the cover of a Madden game will suffer some kind of injury or misfortune which will send their careers into a downward spiral. It has happened before, and it happened just now: one of the two players on this year's edition of the game, Troy Polamalu of the Steelers, just injured a ligament in his left knee and will thus be forced onto the sidelines for three to six weeks.

Doesn't sound that bad? Just wait. He'll miss all six weeks and his stats will drop like crazy, everybody will forget about him, and he'll lose his sponsorship deal with Campbell's Chunky Soup. And let's not forget that there's another guy on the cover - Cardinals receiver Larry Fitzgerald - who needs to get his share of the Curse as well. I would just quit while I'm ahead if I were that guy.