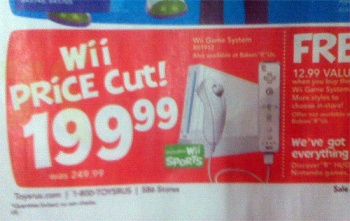 A leaked Toys R' US advertisement seems to suggest that Nintendo will be following Xbox 360 and PS3 price cuts with the Wii, slashing the price to $200 by the end of the month.

This ad you see here to the right was leaked by a tipster to Kotaku, and would appear to support rumors floating around the internet that Nintendo, having realized that its competitors are starting to encroach dangerously on the Wii's family-friendly $250 price tag, will cut the price of the Wii to match.

Said tipster claims that the price cut will hit the week of September 27th, just in time for the holiday season to begin. At just a $50 cut, Nintendo isn't quite offering the same deal that Microsoft and Sony did, but it's still enough to put a $100 gap between the Wii and its rivals in the console market.

Now, again, this is just a rumor, and until something is officially announced by Nintendo that's all it will ever be. It's also possible that, if true, this is a separate Toys R' Us promotion, not a Nintendo one. Still, for all Nintendo has been raking in cash hand over fist with the Wii up until now, the company would be very shortsighted to not realize that one of the Wii's most attractive details - its low price tag - isn't quite so attractive with more powerful machines for just $50 more.