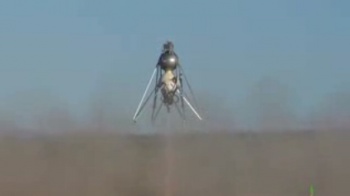 Armadillo's 1900-lb landing craft, named Scorpius, successfully completed the challenge: Fly 50 meters (164 feet) into the air, land on a rocky simulated lunar landscape another 50 meters away, and then do it all over again in reverse. To simulate the amount of time necessary to escape the Moon's gravity, Scorpius had to have a minimum flight time of 180 seconds per each ascension.

Sounds tough, right? According to Space.com, though, it went like a proverbial breeze. It must come as a relief, too: This was Armadillo's second attempt at the Level 2 challenge, after completing the Level 1 part last October - only to have their lander crash when they attempted to move on.

If neither of the other two competing teams - Masten Space Systems and Unreasonable Rocket - can complete the challenge by the contest's end date of October 31st, then Carmack and Armadillo will take home the $1,000,000 grand prize by default. And after that? Well, there's nowhere to go but up. Quoth father-of-PC-gaming Carmack:

Since the Lunar Lander Challenge is quite demanding in terms of performance, with a few tweaks our Scorpius vehicle actually has the capability to travel all the way to space. We'll be moving quickly to do higher-altitude tests, and we can go up to about 6000 feet here at our home base in Texas before we'll have to head to New Mexico where we can really push the envelope. We already have scientific payloads from universities lined up to fly as well, so this will be an exciting next few months for commercial spaceflight.

In space, if Carmack's previous works have taught us anything, there will be aliens and demonspawn from Hell. Just think of this as a way for Carmack to take the fight to them first.