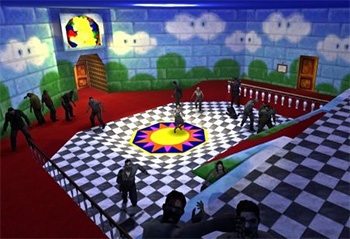 If there was one thing missing from Super Mario 64, it was zombies. Thanks to one Left 4 Dead modder, that's no longer an issue.

Mashups like this have existed since people first started hacking together levels for Doom, but few have the appeal of Mushroom Massacre. Maybe it's my penchant for the sociopsychological ramifications of zombie hordes, or the hilariously dark juxtaposition of Nintendo's cheery world with decomposing, reanimated corpses, but this campaign strikes me as pure genius.

Personally I hope that creator "DoritoClock" uses the success of this work to continue a series of "zombies in inapppropriate games"-themed levels. I'd pay good money to see a swarm of zombies dropped into the whimsical world of Katamari Damacy, or forced to fight for their lives against Virtua Fighter's pugilists.