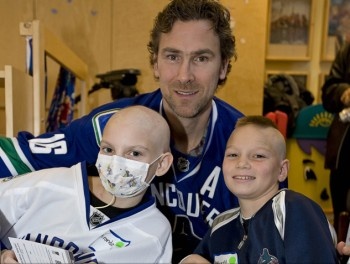 Former Vancouver Canucks captain Trevor Linden says that one of the best things about the new NHL 10 from EA Sports is that it teaches kids when it's okay to beat the crap out of someone.

Linden endorsed the game and its realistic fighting mechanic while giving it a try at a Vancouver retailer on Monday, the day before it hit the shelves. The game's new first-person fighting system lets players grab opponents' jerseys and make "fist to face contact," which Linden described as "very cool." He also noted that the game could teach children that sometimes, when people get too far out of line, it's necessary to correct their behavior by pounding them into goo.

Linden, who plays earlier versions of the NHL games with sick and disabled kids through charities like Ronald McDonald House and Canuck Place, said he's a fan of the franchise because it gives them a chance to enjoy hockey even if they can't get out to actually play the game. "They love to say they laid a beatdown on Trevor Linden," he added.

And despite his belief that fighting has a place in hockey, he doesn't want to see hordes of ten-year-olds lining up to drop the gloves, saying it's up to parents and coaches to teach kids to play the game properly. "They need to be taught hockey is a game of respect," Linden said. "That comes from the people most important in their lives."

"What If" Becomes Reality Dana Massey 0 Comments
Comments on