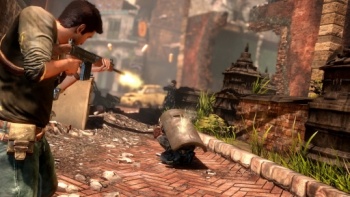 Uncharted 2 co-lead designer Richard Lemarchand says that main character Nathan Drake was designed to be a cross between The Adventures of Tintin's protagonist and Bruce Willis' John Mclane from Die Hard.

I have it on good authority that people really liked the first Uncharted, or something along those lines. It might not have pushed too many boundaries in terms of development (to quote one snarky Brit, the game was "safe"), but no one said a game had to be revolutionary to be great, right? It can just be a damn good game.

VentureBeat has an excellent interview up with Uncharted 2: Among Thieves' co-lead designer Richard Lemarchand about where Naughty Dog tried to take the sequel, currently one of the biggest titles scheduled for this fall (that hasn't been pushed back to 2010, anyway). Lemarchand discussed, among other things, how Naughty Dog was trying to make a "movie-like blockbuster," and in doing so looked back to the very beginnings of adventure storytelling for inspiration for the character of Nathan Drake.

He is recognizable as a regular guy. That was important for us. We wanted him to be a fallible hero - that was common as a thread in all of the pulp fiction we looked at. Our research for the original Uncharted took us all the way back to the beginnings of adventure storytelling. We looked at Robert Louis Stevenson and Robinson Crusoe. We zeroed in on early 20th century stories like Doc Savage, who was a finely honed physical specimen. That led us to heroes like Tintin. There you get more color in the characters, and more globetrotting in the stories. We looked at John Mclane from Die Hard. They're not highly physically trained, but more regular guys who fight in a sloppy way. They don't have precise Ninja powers.

In other words, Nathan Drake is the master of the Indy Ploy - and if you think he's not pushing any boundaries as a character, that's probably because he's not meant to. Nor was he meant to be Tomb Raider's Lara Croft, as he is perhaps most frequently compared to: "Lara is in the vein of the perfect spy with precise athletic abilities. Nathan was always at right angles to that. That's why he is a recognizable character. It's very humanizing. He throws a punch in a way that will put him off balance and let him get clunked on the head," says Lemarchand.

To do so, the team used several different animation techniques beyond simple motion capture - rather than going for ultra-realism, Naughty Dog aimed more for a stylized pulp fiction feel. Were they successful? I suppose we'll have to judge when the game comes out next month on October 13th. Sorry, I meant Rocktober 13th. Boy, that'll be a tough choice for some, huh?

If you're biting your nails in anticipation for Uncharted 2, the full interview is worth a read. Certainly worth more of a read than slightly absurd reviews giving the game a better-than-perfect score, anyway. That's just silly.

Jimquisition: Jimquisition Awards 2013 - The Last of Us Jimothy Sterling 98 Comments

Unskippable: The Last of Us, Part 1 Graham_LRR 27 Comments
Comments on