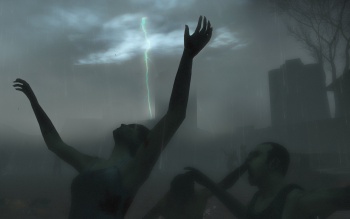 Left 4 Dead 2, Valve's upcoming multiplayer zombie killfest, has been refused classification in Australia, meaning it will not be available for sale in the country in its current form.

The original Left 4 Dead was given an MA15+ rating by Australia's Classification Board but the addition of melee weapons to the sequel seems to be a sticking point for the agency. "It is the use of 'melee' weapons such as the crowbar, axe, chainsaw and Samurai sword which inflict the most damage," the board said in its report. "Those close-in attacks cause copious amounts of blood spray and splatter, decapitations and limb dismemberment as well as locational damage where contact is made to the enemy which may reveal skeletal bits and gore. Projectile shots to infected humans can cause abdominal wounds which can reveal innards or even cause intestines to spill from the wounds."

This kind of violence is apparently considered "high impact" in Australia and therefore completely unsuitable for gamers under the age of 18. Since the country has no gamers over the age of 18 anyway, the board decided that there was no point in allowing its sale.

The news was "hugely disappointing" for Chad Polley, the national marketing manager for Gametraders, who was no doubt imagining a multitude of shiny little dollar signs slowly floating out his window. "Left 4 Dead 2 was expected to be even bigger than the original version," he said. "We had huge predictions of sales."

The jig isn't up just yet, however. A representative from distributor EA said the company was in touch with the Office of Film and Literature Classification, presumably to see if changes could be made to get the game under the wire. "(We) are still working through the submission process with the OFLC and want to explore all opportunities before making any comment," the company said.

There is one bit of good news in all this, however: The Classification Board just wrote possibly the best review for L4D2 that Valve could ever hope for. Decapitations and limb dismemberment? Locational damage and spilling intestines? I am so there.