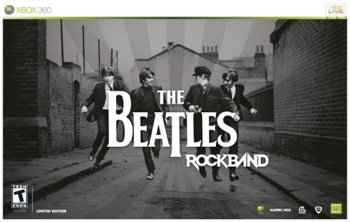 Sales of The Beatles: Rock Band are beating MTV/Harmonix parent company Viacom's expectations for the game with a quarter of the inventory already sold through, Viacom remarked today.

Things are looking up for The Beatles: Rock Band, if you ask Viacom. The media conglomerate, which owns MTV, which owns Harmonix, remarked at a conference today that sales of the game are "terrific" and surpassing estimates. "Sales have exceeded our internal projections and we've sold 25 per cent of our inventory in the first week," Viacom CEO Philippe Dauman said.

Dauman said that he expects Viacom will turn a 20 percent profit margin on the game, a gain which might be tempered by the fact that Viacom will have to turn over a hefty sum of royalties to Beatles business branch Apple Corps, music company EMI and Sony/ATV Music Publishing. Viacom guaranteed The Beatles' rights holders $10 million minimum, with another $40 million if the title met sales expectations. It has, apparently, met sales expectations and beyond, so that money's going to have be forked over.

"The royalty rates on this are not even comparable to anything that has been done before," Martin Bandler of Sony/ATV Music Publishing said.

At the same time, The Beatles: Rock Band's music game rival of the year, Activision's Guitar Hero 5, outsold the game by quite a margin, taking the top spot on the UK charts while The Beatles: Rock Band sat down at number four, certainly not a bad place to be in, but probably not as high as it wants to be compared to its rival.

So even if Viacom sees The Beatles: Rock Band as a success right now, it does seem to not yet be a complete triumph, and is far from an instant one. But if sales stay consistent or improve, well, things could get better all the time (or they might not get any worse).