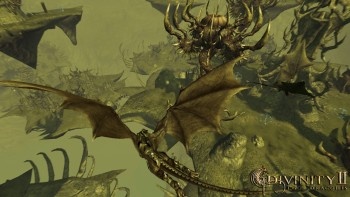 CDV USA has announced that the English-language release of Divinity 2: Ego Draconis will be landing on North American shores in December, just in time for the holidays.

Divinity 2: Ego Draconis is the third chapter in the Divinity series of action-RPGs based in the mythical land of Rivelllon. Players begin the game as a Dragon Slayer, ridding the land of the fabled beasts, but as the game progresses they will discover their true power as a legendary Dragon Lord, able to assume the form of both humans and dragons as they quest across the massive dungeons and great outdoor spaces of the war-torn land.

"Divinity 2: Ego Draconis is a perfect fit for the North American market, and we are very excited to be publishing it," said CDV USA Chief Executive Tom Gross. "Larian Studios is a well-respected developer and for this reason we are very glad to be able to expand our US line-up this holiday season with such a fantastic product."

Ego Draconis is the follow-up to Divine Divinity, the 2002 RPG from Larian studios, and its 2004 semi-sequel Beyond Divinity. While neither game is particularly well known in North America, Divine Divinity gained something of a cult following among PC gamers for its huge, wide-open world and depth of gameplay; Beyond Divinity, unfortunately, dropped the ball a bit and did not fare as well with critics or fans.

Divinity 2: Ego Draconis is being developed for the PC and Xbox 360, and is expected to be in stores for December. More information is available at divinity2.com.