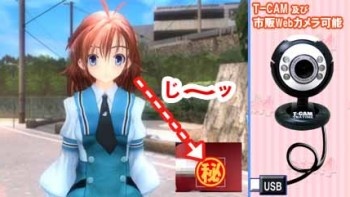 Okay, I admit it, it's not actually called wang recognition technology, or "wangtech" as I like to call it, that's just what it does. According to a report posted on Canned Dogs, the game will make use of an "enhanced" version of the face-tracking technology developed for the game Tech48 which will also detect shapes.

The system will presumably detect a wide range of differently shaped objects, like pencils, candles, sausages, cigars, woodwind instruments and more, but I think we all know where this is headed. After all, that may not be a peen on the screen but whatever that big red-and-white arrow is pointing at sure does look mighty phallic and that, my friends, is a sure-fire sign that pantsless hip-thrusting as a play mechanic (not to mention out-of-warranty webcam repairs) are about to see a big surge in popularity. (It may also be a sign that the End Times are upon us.)

I suppose it's possible that this new digital dick detector could be used for other purposes but let's not kid ourselves: This thing isn't being sold so you can use your finger to point at on-screen objects. The example provided by Teatime, Canned Dogs says, "suggests that the character will recognize the male sexual organ and react to it." And if that reaction is to point and laugh, you lose, pal.