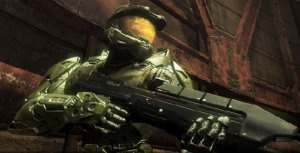 Neill Blomkamp, director of the acclaimed District 9, may no longer be involved with the scrapped Halo movie, but he still loves the Master Chief - to Blomkamp, he's "a victim of this military-industrial complex."

Back in July, we learned that Peter Jackson's Halo movie project had fallen through, and the Lord of the Rings filmmaker - along with director Neill Blomkamp - had moved on to focus on District 9. Halo fanboys worldwide bemoaned the loss, though others wondered if perhaps we hadn't lucked out after all.

Speaking with Rotten Tomatoes about District 9 and whether or not he'd go back to a Halo project in the future (such as the one allegedly being worked on by Steven Spielberg), Blomkamp said that it was unlikely, but he was still fascinated by the game's setting and its characters - particularly the Master Chief.

But the flip side is that the reason I wanted to do Halo in the first place, and the reason I was so energised to do Halo, is that creatively I love it. I totally love the universe of Halo on every level. Not only is it this epic space saga but Master Chief is such an awesome character. This guy - whether he knows it or not - is a victim of this military-industrial complex. It's a totally compelling world to be involved in. So on a creative level I'd love to go back there, but I probably would say no.

The difference between the humans-and-aliens dynamic in District 9 and that in Halo, said Blomkamp, is that one is just our modern-day society, while one is our society hundreds of years in the future. "Most of the work we were doing on Halo - I mean we were designing the Covenant and all of the aliens but predominantly the thing that interested me was the human side of it, which District 9 has none of. The humans are just humans here," he elaborated. "In Halo, it's many hundreds of years in the future with a totally different society - that's really what I was getting into. And the technology and the Pillar Of Autumn and Reach - all that stuff."

A victim of the military-industrial complex, eh? Well... yeah, okay, reading the backstory and the books, I guess one could make that argument. And here I thought he was just some guy in power armor who shot aliens in the face.