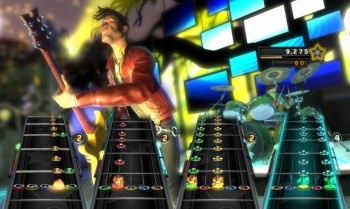 Guitar Hero publisher RedOctane says it is evaluating Microsoft's Project Natal and that it's "likely" the motion-sensing system will be eventually incorporated into the game.

"We've definitely been evaluating Microsoft's Natal technology along with a lot of other different technologies that could enhance the Guitar Hero playing experience," RedOctane President Kai Huang said. "Natal is very interesting because there's so many different things you can do with it, whether it's the motion detecting, maybe sensing how you're playing, or the ability to use it for interactivity purposes and taking advantage of it for party purposes."

It seems like a natural fit. Project Natal could, for instance, allow the inclusion of a whole new layer of hard-rockin' moves: Instead of just pushing colored buttons on a guitar shaped controller, players could score points for pulling off moves like a windmill, a kick or a leap, with double-bonus points awarded for smashing your guitar over the couch at the end of the song.

"I think the technology is very exciting," Kai said. "We're evaluating it, and I think it's likely that sometime in the future we'll have those technologies integrated into our games."

He's not the first one to see the rock 'n' roll potential in Project Natal, however: In August, MTV Games said Harmonix was "looking at" Project Natal, along with other new technologies, for Rock Band 3.