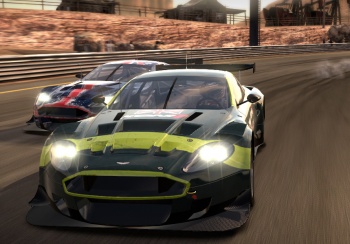 Racing is all about dollars. Generally the boys with the fanciest engines and the most expensive drivers are going to run away with the field. In that light, it's almost fitting that EA would go to such great lengths to emulate that concept with Need for Speed: Shift.

Let me bring you up to speed: Last night I got home after a day of partying in celebration of my twenty sixth birthday. I was in a great mood. I'd had delicious bacon, pretty girls and surprisingly good weather all day and now I was cracking into the newly-sent-to-me Need for Speed: Shift.

Now I'll admit, I'm a terrible race car driver. Doubly so when it comes to these "simulations." If you set me atop a hairpin turn I'm more likely to ride the wall into a flaming pile of wreckage than actually make it to the bottom. But, I love the "concept" of these games. I like the feeling of being a fancy British fellow strapped into a $100,000 land-based rocket and trying, however futilely, to out-maneuver a group of similarly rocket-equipped lads. Hence, I own all the Gran Turismos, all the Forzas, and I've been looking forward to Need for Speed: Shift for quite a while.

On starting the game my hopes were seemingly justified. The game is truly gorgeous, besting Forza 2's industry-leading racing simulation graphics and infusing them with a slick, urban yet erudite aesthetic that perfectly fits the world of high-class racing promised by the game. The soundtrack is packed with a great blend of indie and electronic bands, and everything just "feels" right, from the stylized menus to the almost dour British announcer offering tips on how to properly apply braking pressure and not snap your virtual neck while whipping through a no-doubt legendary road course that I'd never heard of.

Immediately after firing the game up, Shift puts you behind the wheel of a stylish BMW and asks you to run a test lap so the computer can gauge just how skilled you are. This first lap is designed so the game knows how to calibrate the game's difficulty level to your own personal skill. It's a neat trick and once the first level was complete the game assigned me a pretty appropriate level of difficulty.

That being determined, the game decided I had to earn some cash to afford an actual car of my own. Using the same BMW I'd so recently smashed to bits in an attempt to explain to the game that I'm the racing world's equivalent of a handicapped meerkat, I lined up against six other racers, most of whom I imagined laughing at me underneath their perfectly detailed racing helmets. Two minutes later we'd completed the game's first race and it was time to see how much cash I'd earned toward my first car.

Like I mentioned, I'm terrible at this kind of thing, so I wasn't entirely shocked to see I'd placed last. Glancing through the list of cars I wasn't entirely shocked to see that I couldn't afford a single one. I was however, a bit shocked when the game offered me the option of shelling out Microsoft Points for any of the cars on display. The prices weren't exorbitant, but this was the first time a game had ever offered me the chance to shell out real cash for something I would otherwise be expected to earn through in-game skill. Not wanting to spend the admittedly meager 50 cents just to advance, I scrolled through the available menu screens in an effort to try that last race again. I now had the feel of the game down, so I imagined I would have to do better than before.

Only there is no option to restart that first race. I scanned the screen, pressed every button available and scrolled with all my might, and yet Shift refused to give me a second chance at earning cash for a car. Without the cash I couldn't advance to any other events unless I wanted to drop real-world money for a virtual Audi, and as a matter of pride I simply refused to fork over any amount of money just to play the actual game. Ten more minutes of frustrated searching and I decided to restart my system, resetting all my progress and earning another shot at the podium.

My next attempt went much better. With a handle on how the game's physics model works I managed to snag a first place win on that crucial race and earned enough cash to afford a relatively lame Audi S3. Eventually I'd upgrade to a jet black Audi TT 3.2 Quattro -- that I've nicknamed "Death Machine" -- but the initial sting of Shift's attempt to wedge itself into my pocketbook has stuck in my mind.

A few moments ago I tried to replicate my initial experience and found that my rage is a bit premature. It looks like the game itself won't force you to spend cash for that first car, but if you land in last place as I did you have to scroll through a dozen vehicles before you find the one or two clunkers you can actually purchase with your meager winnings. This could be explained away by saying the cars are displayed in alphabetical order, but if I'm sitting here baffled by the system enough to want to write all these words on the topic of my outrage, how many other, less savvy gamers are going to find themselves angered by a game that seemingly offers no recourse for failure?

Some may prefer Shift's system. There's a convenience level built-in for those gamers who simply want to dive into the game, buy a $600,000 Lamborghini (for $3), and immediately take on a track full of similarly equipped online gamers. I'm fine with that. Offering that as an option is perfectly legit, and while I won't ever spend real cash on a faux car that doesn't come equipped with rockets and speak in the soothing voice of William Daniels, I can understand why some people might want to.

It should however, remain an optional device. No one should be forced to spend extra cash to simply play a game they've already paid $60 for. The optimistic side of me would like to think we aren't headed toward a future where the gamer with the biggest pocketbook will always have the best of everything, but Shift is further evidence that in gaming, as in all things, money makes the world go round.