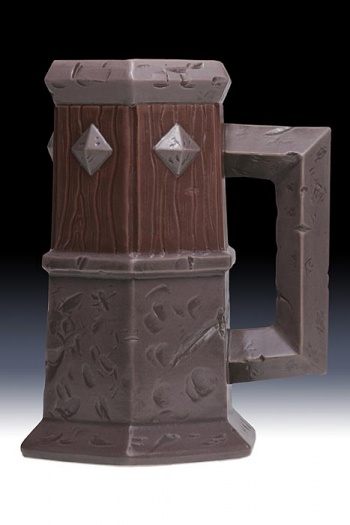 Have you found that drunken ram riding and wanton slaughter just aren't enough to properly celebrate Azeroth's Brewfest? Why not celebrate the holiday in real life with this two-liter replica of the in-game Tankard O' Terror beer stein?

I really want to meet the man who decided that of all the World of Warcraft merchandise out there, the one things that we were missing were beer steins. I want to meet him, and I want to hug him, because I love these things. I've got a Horde stein here on my desk (despite my allegiance to the Alliance - I have to admit it just looks better) but sadly, would never drink out of it. It's for admiring, not for imbibing!

"The Tankard O¹Terror is truly massive in size, weight and capacity, and will be a lot of fun for World of Warcraft enthusiasts," said Jerry Bennington, president of 3 Point Entertainment - the company behind Taverncraft. "There¹s never been anything quite like it, and I¹m confident players will enjoy using their tankards to celebrate alongside their in-game characters."

Sadly, though I'm sure Mr. Bennington meant well, he's not entirely correct. Since the in-game Brewfest ends October 3rd, if you're looking to get your stein and celebrate by getting smashed in real life alongside your WoW character, you're out of luck: For the moment, the manufacturers are only taking preorders - the real things won't ship until mid-November. Still, you could always get one in preparation for next year, right?

Or better yet, since they're non-unique, one-handed items - not to mention that at $40, they're less than half the price of their more ornate, decorative cousins - get two and dual-wield. Yes, you heard me right: Dual-wield a total of four liters of your alcoholic brew of choice.

It's so pure I think I'm going to cry.