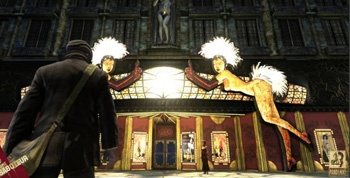 Ever give up on a game because it's too hard? Well, if Pandemic Studios has its way, that game won't be The Saboteur: The developers want everybody and their mother to be able to finish the story to the end.

Speaking with MTV Multiplayer, The Saboteur's lead designer Tom French said that difficulty was one of the team's top concerns - and that the designers balanced at the top and moved downward:

"Difficulty settings are always tough. For our game, especially, where we have a lot of story focus, but there's also a lot of gameplay there, we wanted to make it so that anyone could sit down and play through the story. Difficulty for us is more about how much damage you do, things like that. We balance the game on the Hardcore mode [the hardest mode in 'Saboteur']. If we can play through it on Hardcore then that's a good balance for us and we just tune it down."

We wanted the player to play through the story, meet all these characters, have the chance to experience it. I can have my wife play it on easy and she gets away with it and still has fun."

Frankly, I don't see a problem with this idea at all. Gamers have pooh-poohed things like Bayonetta's "Automatic Mode" or Nintendo's rumored "game plays through tough sections for you" technology, I still don't get why it's such a bad thing. As long as the game isn't forcing you to use it - and still has harder difficulty settings for a real skill-based challenge - then what's wrong with including easier and easier modes so that everybody CAN experience the game for themselves regardless of skill?

I mean, we hear there are going to be boobs in Saboteur, and we can't let silly things like talent or skill keep us from some nice pixelized ta-ta's, can we?