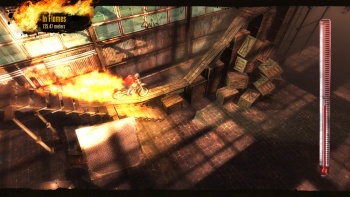 A game that sells 300,000 copies certainly hasn't done poorly, but it isn't exactly busting the charts, either. Even so, Trials HD developer RedLynx is satisfied with the performance of their little-XBLA-title-that-could.

Speaking with CVG, RedLynx studio CEO Tero Virtala pointed to the modest success of their physics-platform-racer as an example of how downloadable services like Xbox Live Arcade could open doors for small developers that would be firmly closed otherwise.

"We're a smaller, 25-person multiplatform studio, and for us this is an excellent example of how digital download space opens up significant opportunities that might not otherwise be available for creative and talented smaller teams," he said. It's hard to disagree with the man, either - on store shelves, Trials might have been buried by big-name titles like Batman: Arkham Asylum, but via the XBL marketplace it's just a click away.

In fact, it's becoming increasingly likely that we'll see more games like Trials as digital distribution services like XBL, PSN, and Steam become increasingly ingrained in the gamer consciousness. A small team keeps costs down, a lower price means that it's more attractive to penny-pinching gamers, and it doesn't have to sell quite as many copies to break even.

Congrats, RedLynx. You might not be setting the world on fire, but you're doing well for yourself anyway. Now how about some DLC tracks, eh?