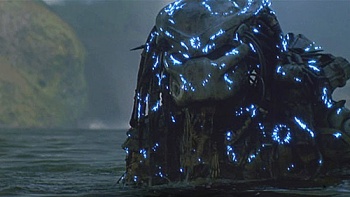 The new Predator movie will return the titular alien hunters to their original design, says the movie's make up artist.

The movie buffs amongst you are probably already aware of this, but the hunters in Predator looked different from those in Alien vs Predator, and for the reboot of the franchise, Predators, award-winning make-up artist Howard Berger, whose credits include Army of Darkness, Kill Bill and Sin City, is keen to go back to the series' roots.

Normally the word reboot sends chills up the spines of fans, as directors miss the the point of the original source material, but the Robert Rodriguez's sequel is characterized by it's desire to respect and expand upon the 1987 movie. Will it pay off and be one of the few franchise jumps-starts that is actually worth watching? Let's hope so.