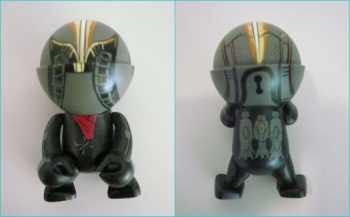 What could be better than a golden jetpack? A 3-inch figure, of course.

Those who want to preorder Capcom's Dark Void now have a second and much superior bonus choice over GameStop's gold plated jetpack. The Dark Void team has just revealed that preordering from Game Crazy instead will net you a 3-inch Trexi of the game's main character. I didn't know what a Trexi was before this reveal, but now I want this one desperately. Sure, the gold plated jetpack might be nice to fly around on, but I can't put it on my shelf and giggle at it everyday for the rest of my life.

My desire to own this Trexi could have something to do with my belief that Dark Void will be a sleeper hit. The game's themes: parallel universes, aliens, vertical combat, and jetpacks for goodness sake, are almost too awesome to combine in one package. Capcom is going ahead with it, though, and I can't wait.

If you don't know what a Trexi is either, visit the item's official website. They appear to be in the same vein as Munnys, Mighty Muggs, and other similar figures. The Dark Void preorder Trexi has actually been designed by i am 8-bit, the same company that puts on annual old-school videogame art exhibitions.

Why we like miniature deformed versions of things so much, I really can't explain. All I know is, whenever I see a Mighty Mugg or a Lego-version of She-Hulk, about 85% of me wants to spend my life's savings on it. If there was a Game Crazy nearby I'd be tempted by this Trexi to head in and preorder Dark Void, which is currently scheduled for release in mid-January for the Xbox 360, PlayStation 3, and PC.