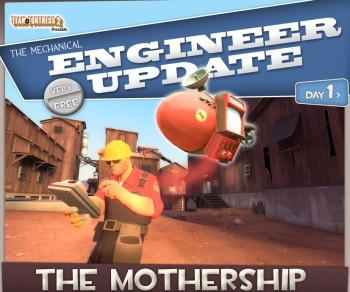 Another day, another amazingly good fake Team Fortress 2 update, this time around featuring the Engineer and some new maps and equipment for everybody's favorite wrench-wielding problem solver.

The TF2 Guard Dog "update" was damn good but this one is downright amazing. In fact, it's so well done that I'm not entirely convinced it's not real even though the fine print at the bottom of the update clearly says, "This is a fake." But the art is flawless, the writing is believable and the ideas behind it all seem perfectly reasonable to me: A radio controlled, hydrogen-filled mini-blimp mobile dispenser and The Hellraiser, a radioactive nail gun that not only does damage but also leaves a radioactive trail, making hidden or cloaked enemies easy to track down. (Also, as the update cleverly notes, it's a "Radioactive Nail Gun.")

At first, I was completely taken in by the update but its appearance on a Brazilian TF2 site and nowhere else left me a bit nervous; the fact that Diogo Lima, the man behind the TF2 Guard Dog, also hails from Brazil is probably just coincidental but didn't do anything to put my mind at ease. A closer look at the site eventually led to the admission that it is in fact a fake, along with an email address that presumably leads to the creator.

And yet, a part of me can't let go of the thought that maybe this isn't a fake at all. Maybe it's actually a double-fake, a real update masquerading as a fan-made work that's been posted on a Brazilian site as a tip of the hardhat to Mr. Lima. Maybe Valve is answering cleverness with cleverness of its own. Maybe everyone so proudly claiming that they saw through the ruse from the moment they laid eyes on it are in fact about to fall victim to an even deeper form of cunning and misdirection!

Maybe, maybe not. Either way, whether it's a stealthy fake-out by Valve or a fantastically well-done fake-out by somebody else entirely, the Engineer Update is not to be missed. Have a gander and decide for yourself at teamfortress.com.br.

Thanks to Medical for the tip.