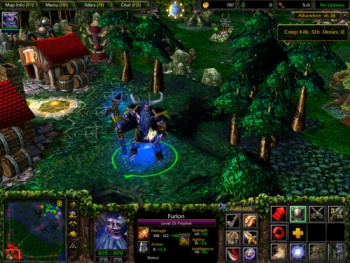 Describing the move as "great news for DotA fans," Defense of the Ancients: Allstars developer "IceFrog" has announced that he is now "leading a team" at Half-Life developer Valve Software.

Continuing the overarching theme of "let's be as mysterious about this as freakin' possible," Mr. IceFrog offers no solid details on what he is working on for Valve or why it would, in any conceivable way, be a good thing for fans of a free to play modification for Blizzard Entertainment's WarCraft III. Though, to be fair, he does say "I look forward to revealing more specific details when the time is right."

Worry not fans, the jump to Valve will seemingly not hinder the development of Defense of the Ancients. "My goal and top priority in the future is to solve the surrounding issues that affect the DotA experience in order to allow it to reach new heights," says Mr. IceFrog. "Addressing these issues will enable us to further enjoy aspects of DotA such as the gameplay, mechanics, and in-game feel that currently work well and ought to be maintained. As I've said many times in the past and especially after today's developments, I am very excited about DotA's future!"

With all this nebulous information available, fans will doubtless speculate on the connection between Valve and Defense of the Ancients. Is Valve planning a similar, for-profit game? Is Valve head Gabe Newell such a DotA fan that he simply wants to fund the thing for his own personal enjoyment? Will Gordon Freeman appear as a new hero in the next DotA update?

No. Of course not. That last idea was idiotic.