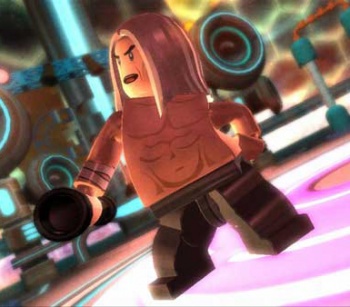 Breaking rank from the vast majority of classic rock icons, former Stooges frontman Iggy Pop has come out in defense of rhythm games such as Rock Band and Guitar Hero.

While speaking to USA Today about his Lego doppelganger's upcoming appearance in Lego Rock Band, Mr. Pop was asked whether he thought modern rhythm games are a "lazy way to try to produce music" or a catalyst for encouraging latent creativity in otherwise sedentary gamers.

"When I was a kid, the first records that spoke to me were novelty songs, like Charlie Brown by the Coasters or The Witch Doctor and Flying Saucer records in the 50s," Mr. Pop said. "Later, as my tastes developed, of course, I changed, but these silly songs got me started. So I say I come down on the 'let the kids have some fun and get into it' side of the argument."

Surprised that a man once famous for slicing his own chest open on stage would offer such a reasonable response to the ongoing controversy? Don't be. It seems that Mr. Pop has mellowed somewhat in his twilight years, as evidenced by his response to questions on how he was cajoled into appearing in Lego Rock Band.

When asked how this seemingly bizarre collaboration with developer Harmonix came about, he said simply, "They asked. There's not much I won't do if you asked nicely."