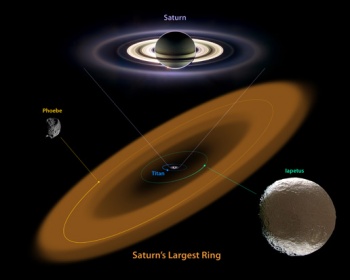 No doubt justifying all space-based budgetary expenditures for the next century, NASA scientists have discovered a new ring around Saturn.

The really bizarre bit is that though humanity has known of the ring-infested planet since prehistory (and its rings since at least the 17th century), this new ring is described by NASA as "by far the largest of the giant planet's many rings."

You'd really think something like that would be hard to miss.

The new belt lies at the far reaches of the Saturnian system, with an orbit tilted 27 degrees from the main ring plane. The bulk of its material starts about six million kilometers (3.7 million miles) away from the planet and extends outward roughly another 12 million kilometers (7.4 million miles). One of Saturn's farthest moons, Phoebe, circles within the newfound ring, and is likely the source of its material.

Saturn's newest halo is thick, too -- its vertical height is about 20 times the diameter of the planet. It would take about one billion Earths stacked together to fill the ring.

So what does this mean for humanity? Not much really, but you better believe certain other planets are jealous. Saturn gets all the shiny, fancy rings and Uranus just gets s#!* on!

(Yes, I've been waiting to type that all day.)