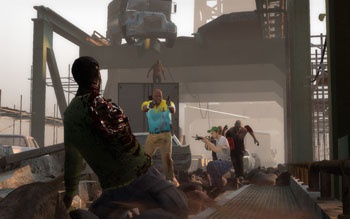 Looks like Australians will be able to get their Left 4 Dead 2 on after all, as long as they don't mind playing an edited version of the game that will probably suck.

Left 4 Dead 2 was refused classification when it was submitted to the Australian Classification Board in September, a decision that effectively banned its sale Down Under. Distributor Electronic Arts has launched an appeal of the decision but in order to ensure that the game is on store shelves in one form or another when it is released in November a censored version, which according to News.com.au "removes considerable amounts of gore from gameplay," was also submitted and has been given an MA15+ rating.

The Classification Board said the "revised version" of the game still contains violence that is strong in impact, but it has been cleaned up considerably; while "large and frequent blood splatters" remain, the report notes that "no wound detail is shown and the implicitly dead bodies and blood splatter disappear as they touch the ground." Furthermore, "The game no longer contains depictions of decapitation, dismemberment, wound detail or piles of dead bodies lying about the environment."

Thanks to Fenixius for the tip.