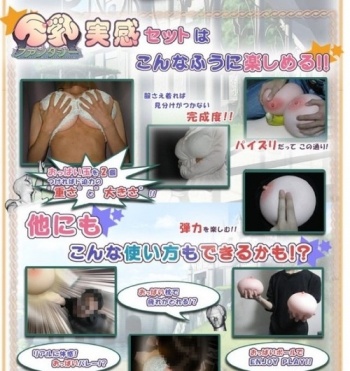 Yeah. I'm kind of finding myself at a loss for words, here. At first, I was wondering if perhaps the pair of squishable "oppai balls" (oppai, of course, being the Japanese word for "titties") were included as an optional control method. You know - plug them in to your computer via USB, squeeze them, watch the in-game girl react to your lascivious groping.

But no, as near as I can tell, the oppai balls have nothing to do with the actual game. They aren't part of the interface, they're just part of a special bundle for Huge Breast Fantasy for those who feel that the simulated touch of synthetic human flesh is worth ¥11,000 (US$123). Even more perplexing is the fact that the included G-cup bra seems to suggest that these are meant to be worn. Presumably by the player themselves.

I guess that's an entirely different kind of "Huge Breast Fantasy," to be fair.

I bet this game was secretly made by Team Ninja.

(Waffle (NWS), via LiveDoor, via Kotaku)