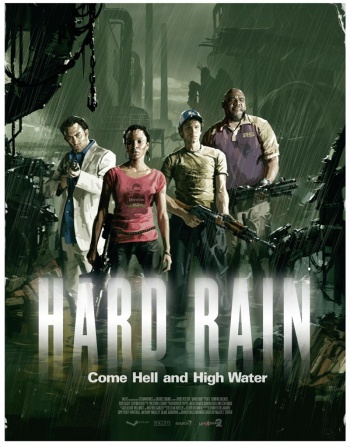 Valve has confirmed the authenticity of a leaked list of Xbox 360 Achievements for Left 4 Dead 2, indicating that the final two campaigns leaked this past weekend are the real deal.

A few days ago, on Sunday, October 11th, we reported that a Taiwanese gaming site had leaked what were purportedly the then-unknown final two campaigns for Left 4 Dead 2. On the one hand, we had Dead Center, a zombie kill-a-thon set in a giant mall a la Dead Rising or Dawn of the Dead, and on the other we had Hard Rain, which looked to be in some sort of flooded industrial setting (not to be confused, of course, with Heavy Rain or Chocolate Rain).

While it looked pretty official, it was still only a rumor - until now. Xbox360Achievements managed to get their hands on the full list of Xbox Live Achievements for the upcoming zombie-shooter sequel, a list which Valve's Doug Lombardi confirmed to G4TV was legit.

So yes, this list confirms that Dead Center and Hard Rain will be joining the previously-announced Dark Carnival, Swamp Fever, and Parish campaigns for a total of five different Infected-slaughter scenarios. Just over a month to go until November 17th, people.

* CHAIN OF COMMAND - Kill 100 Common Infected with the chainsaw. (15G)
* TANK BURGER - Kill a Tank with melee weapons. (30G)
* SHOCK JOCK - Revive 10 dead Survivors with the defibrillator. (30G)
* THE QUICK AND THE DEAD - Revive 10 incapacitated Survivors while under the speed-boosting effects of adrenaline. (30G)
* ARMORY OF ONE - Deploy an ammo upgrade and have your team use it. (15G)
* BURNING SENSATION - Ignite 50 Common Infected with incendiary ammo. (15G)
* DISMEMBERMENT PLAN - Kill 15 Infected with a single grenade launcher blast. (20G)
* SEPTIC TANK - Use a bile bomb on a Tank. (15G)
* CRASS MENAGERIE - Kill one of each Uncommon Infected. (20G)
* DEAD IN THE WATER - Kill 10 swampy Mudmen while they are in the water. (20G)
* ROBBED ZOMBIE - Collect 10 vials of Boomer vomit from infected CEDA agents you have killed. (15G)
* CL0WND - Honk the noses of 10 Clowns. (15G)
* FRIED PIPER - Using a Molotov, burn a Clown leading at least 10 Common Infected. (15G)
* LEVEL A CHARGE - Kill a Charger with a melee weapon while they are charging. (15G)
* ACID REFLEX - Kill a Spitter before she is able to spit. (15G)
* A RIDE DENIED - Kill a Jockey within 2 seconds of it jumping on a Survivor. (15G)
* STACHE WHACKER - Prove you are faster than Moustachio. (15G)
* GONG SHOW - Prove you are stronger than Moustachio. (15G)
* GUARDIN' GNOME - Rescue Gnome Chompski from the Carnival. (30G)
* WING AND A PRAYER - Defend yourself at the crashed airliner without taking damage. (30G)
* SOB STORY - Navigate the sugar mill and reach the safe room without killing any Witches. (30G)
* VIOLENCE IN SILENCE - Navigate the impound lot and reach the cemetary safe room without tripping any alarms. (30G)
* BRIDGE OVER TREBLED SLAUGHTER - Cross the bridge finale in less than three minutes. (30G)
* HEARTWARMER - In a Versus round, leave the saferoom to defibrillate a dead teammate. (20G)
* STRENGTH IN NUMBERS - Form a team and beat an enemy team in 4v4 Versus or Scavenge. (15G)
* QUALIFIED RIDE - As the Jockey, ride a Survivor for more than 12 seconds. (15G)
* BACK IN THE SADDLE - As the Jockey, ride the Survivors twice in a single life. (15G)
* RODE HARD, PUT AWAY WET - As the Jockey, ride a Survivor and steer them into a Spitter's acid patch. (20G)
* GREAT EXPECTORATIONS - As the Spitter, hit every Survivor with a single acid patch. (15G)
* A SPITTLE HELP FROM MY FRIENDS - As the Spitter, spit on a Survivor being choked by a Smoker. (15G)
* SCATTERING RAM - As the Charger, bowl through the entire enemy team in a single charge. (20G)
* MEAT TENDERIZER - As the Charger, grab a Survivor and smash them into the ground for a solid 15 seconds. (20G)
* LONG DISTANCE CARRIER - As the Charger, grab a Survivor and carry them over 80 feet. (15G)
* BEAT THE RUSH - In a Survival round, get a medal only using melee weapons. (15G)
* HUNTING PARTY - Win a game of Scavenge. (15G)
* GAS GUZZLER - Collect 100 gas cans in Scavenge. (20G)
* CACHE AND CARRY - Collect 15 gas cans in a single Scavenge round. (20G)
* SCAVENGE HUNT - Stop the enemy team from collecting any gas cans during a Scavenge round. (15G)
* FUEL CRISIS - Make a Survivor drop a gas can during overtime. (15G)
* GAS SHORTAGE - Cause 25 gas can drops as a Special Infected. (20G)