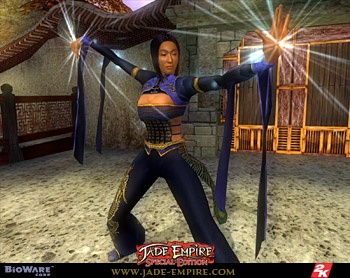 Dragon Age: Origins and Mass Effect 2 are getting all the attention but BioWare's Mike Laidlaw says the studio would also "love" the opportunity to take another crack at Jade Empire.

It's been more than four years since Jade Empire first turned up on the Xbox and while it may not have had the same impact as games like Neverwinter Nights or Mass Effect, fans continue to hold out hope for more. Apparently that hope isn't entirely empty; the game is still popular with BioWare staffers and Laidlaw, the lead designer on the upcoming Dragon Age: Origins, recently said the company is interested in picking it up again at some point in the future.

"We haven't announced anything on Jade Empire 2 yet," he said when asked by Strategy Informer about the possibility of a sequel. "It's pretty much no comment. But, you know, we will certainly announce it if it's going to be coming out."

"At this point, Jade Empire is a staff favorite and a lot of us love it, so we'd love to revisit it at some point," he added. "But right now, we are very focused on Dragon Age and Mass Effect 2."

More Jade Empire? Personally I'd rather see more Baldur's Gate but that's at least in part thanks to my bitterness over the fact that it took two years for the game to come to the PC. (Which is also my excuse for having not yet bought it.) What do you think? Is Jade Empire 2 a winner or just a pleasant nerd fantasy that will never come to pass?