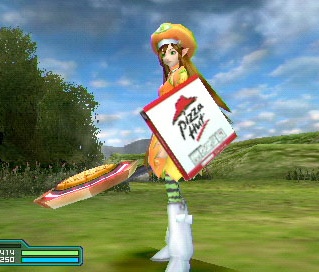 As if attacking the literal interpretation of "good taste" wasn't enough, Pizza Hut has signed a deal with Sega to bring pizza themed equipment to Japan's Phantasy Star Portable 2.

Not only does the promotion offer players a chance to decorate their in-game living spaces with Pizza Hut's amorphous Japanese spokesblob "Cheese-Kun," players are also able to equip themselves with a shield and sword that resemble a cardboard pizza box and steaming metal pizza pan, respectively.

So where does one acquire such epic adverquipment (yes, I just invented that word)? From Pizza Hut's newest location, located within the virtual, far-futuristic world of Phantasy Star. Who needs suspension of disbelief when you have generic, omnipresent fast food?

I want to be thankful that stuff like this could never happen here in The States, but that's just not true. If Pizza Hut (or McDonalds or Coca-Cola or Girls Gone Wild) were to show up at Sega's San Francisco branch with a big bag of cash, you better believe the next Sonic game would feature drunk coeds, greasy fries and Coke Zero.