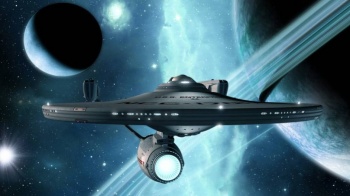 Award-winning UK science fiction author Charlie Stross hates Star Trek, and it's mostly because of the idea of "technobabble."

I'm not sure if Star Trek invented the idea of technobabble or if it merely popularized it, but the franchise and the concept have become so intertwined in popular culture that it's honestly hard to imagine one existing without the other. Where would we be without Scotty telling Kirk that the Enterprise couldn't go any faster because the subspace stress on the dilithium matrix core was destabilizing the refractory alignment of the power couplings - and if it kept up, the ship was going to tear itself apart!

Thanks to a speech given by former Star Trek writer and Battlestar Galactica remake creator Ron Moore, noted sci-fi author Charlie Stross realized that this concept of technobabble - or more precisely, how it fit into the episode scripts - was at the core of his dislike of Star Trek, as he related on his blog:

At his recent keynote speech at the New York Television Festival, former Star Trek writer and creator of the re-imagined Battlestar Galactica Ron Moore revealed the secret formula to writing for Trek.

He described how the writers would just insert "tech" into the scripts whenever they needed to resolve a story or plot line, then they'd have consultants fill in the appropriate words (aka technobabble) later.

"It became the solution to so many plot lines and so many stories," Moore said. "It was so mechanical that we had science consultants who would just come up with the words for us and we'd just write 'tech' in the script. You know, Picard would say 'Commander La Forge, tech the tech to the warp drive.' I'm serious. If you look at those scripts, you'll see that."

Moore then went on to describe how a typical script might read before the science consultants did their thing:

La Forge: "No, Captain. Captain, I've tried to tech the tech, and it won't work."

"And then Data pops up and says, 'Captain, there is a theory that if you tech the other tech ... '" Moore said. "It's a rhythm and it's a structure, and the words are meaningless. It's not about anything except just sort of going through this dance of how they tech their way out of it."

That, says Stross, is "the antithesis of everything I enjoy in an SF novel." Science fiction, explained Stross, is interesting because it has the ability to explore "the human condition under circumstances that we can conceive of existing, but which don't currently exist."

In other words, it's important to envision characters that are a byproduct of a society that possesses advanced technology - and has been shaped by said technology. For example, says Stross, is the modern-day idea of "sexting," which only exists due to the ubiquity of advanced mobile phones - an idea that thirty years ago would have been seen as very much "sci-fi."

By inserting random words into the script as (tech), what good does that do to establish characters in a society that should be irrevocably changed by this advanced technology? It doesn't do that at all, says Stross. "You could strip out the 25th century tech in Star Trek and replace it with 18th century tech - make the Enterprise a man o'war (with a particularly eccentric crew) at large upon the seven seas during the age of sail - without changing the scripts significantly."

You know what? I'd actually probably watch that.