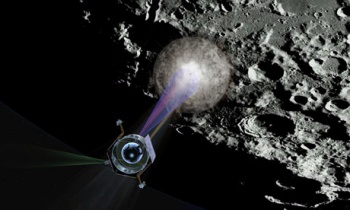 Moments before crashing into Earth's Moon, NASA's LCROSS probe paid homage to Douglas Adams' Hitchhiker's Guide to the Galaxy novels via ... Twitter, of all things.

The Lunar CRater Observation and Sensing Satellite (LCROSS) probe met a fairly spectacular end earlier this month, crashing into the Moon at a speed of more than 2.49km/s (5577mph) in an attempt to uncover ice buried beneath the lunar surface. As the probe hurtled through space, it cheerfully updated a Twitter feed keeping the Internet posted on the mission status - how fast it was traveling and how far away it was from its destination.

Moments before impacting the crater-scarred landscape, the final mission updates paid homage to a suddenly-created cetacean on its way to a space collision of its very own in the classic sci-fi comedy series, The Hitchhiker's Guide to the Galaxy. In the book, two missiles aimed at the protagonists' spaceship Heart of Gold find themselves suddenly turned into a sperm whale and a bowl of petunias by the power of the ship's Infinite Improbability Drive. As The Guardian sums up:

The whale spends the last few minutes of its life pondering its existence - "Ahhh! Woooh! What's happening? Who am I? Why am I here? What's my purpose in life? What do I mean by who am I?" - before it crashes into the surface of the planet Magrathea.

LCROSS may not have been pondering its own existence (at least not as far as we know), but the probe did recount the ill-fated whale's words as it plummeted towards a final collision: "And what's this thing coming toward me very fast? So big and flat and round ... it needs a big wide sounding name like 'Ow', 'Ownge', 'Round', 'Ground'! ... That's it! Ground! Ha! I wonder if it'll be friends with me?"

The probe's impact failed to produce the hoped-for 10km column of dust and rock that would have been scanned for traces of ice (the presence of which would have been a strong argument in favor of colonizing Earth's biggest satellite), but it succeeded in bringing the late Adams' words into space. Where else could possibly be more fitting than that?