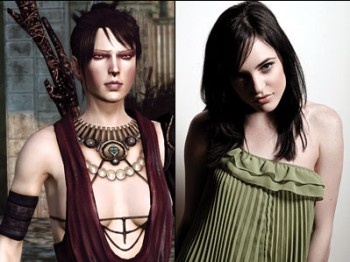 Maxim.com is offering an eyeful of the real-life ladies behind Leliana and Morrigan, two of the in-game hotties in the upcoming RPG Dragon Age: Origins.

What's a BioWare RPG without an awkward, multiple-choice romance subplot? Making it even better, this time around your potential in-game lovelies are based on the flesh-and-blood sort, specifically Victoria Johnson and "Alleykatze," otherwise known as Alexandra Stein, who portray "sneaky seductress Leliana and shapeshifting mage Morrigan." I have no idea who either of these women are; Alleykatze has an amusingly vacuous Twitter blog, but Googling Victoria Johnson is a complete non-starter.

But we're not here to know about them, or care about them, or even think about them; our only interest is in looking at them and they're adequately suited to that purpose. Hair color aside, however, I don't think either woman looks much like her Dragon Age counterpart, but if I was to pursue that line of thought I might end up suggesting that basing videogame characters on bland-looking "models" and then plastering them all over Maxim in various states of undress is little more than a cheap publicity ploy seeking to attract the horny, undersexed teenage boy demographic that's graduated from Mad Magazine but isn't quite old enough to buy Penthouse. And we wouldn't want that.

UPDATE: It turns out that while Maxim has no problem throwing up photos of anyone willing to flash a sideboob, the folks who work there want to make sure they maintain their standing with the meathead crowd. The text that originally accompanied the photos, it turns out, was a bit on the condescending side. To wit:

"Unless doing it kinky-style with your significant other, role-playing is the second nerdiest thing you could possibly do. Playing role-playing video games is No. 1, which puts Bioware's upcoming RPG Dragon Age: Origins at a severe disadvantage in the 'make us interested' category. Fortunately for them, they've got a couple of aces in the hole: sneaky seductress Leliana and shapeshifting mage Morrigan. Both are possible romantic companions in the game, but you don't have to wait until the release date to fall in love with them. We've got exclusive photos of real-life hotties Alleykatze and Victoria Johnson who lent their sexy curves to their video game counterparts."

Compare that with updated entry:

"Cut from the same cloth as their previous Baldur's Gate series, Bioware's upcoming RPG Dragon Age: Origins thrusts players into a world of magic, nobility, and bloody battles. Lots and lots of bloody battles. But, killing off seven-story tall dragons and no play makes one's game character a dull boy (or girl). Fortunately, the developers included a couple of ways allowing one's avatar let off some virtual steam: sneaky seductress Leliana and shapeshifting mage Morrigan. Both are possible romantic companions in the game-the second best kind of sex, next to the real thing!-but you don't have to wait until the release date to fall in love with them. We've got exclusive photos of real-life hotties Alleykatze and Victoria Johnson who lent their sexy curves to their video game counterparts. That's some levelling up we can all get behind!"

As GameBane's Bryan Sharp pointed out, it's hard to say whether EA "asked" Maxim to tone it down or the site just realized that alienating a potentially large portion of its audience was, you know, really stupid. Whatever the case, it's reassuring to know that no matter what the subject matter may be, a little bit of skin on a generically attractive woman is enough to make the great minds at Maxim "interested."